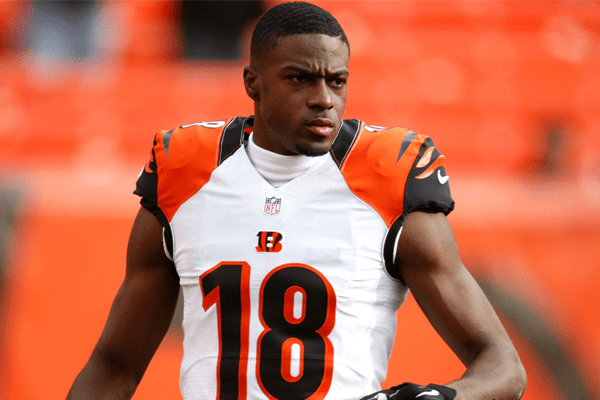 AJ Green statistics have broken record for multiple times as he played for Cincinnati Bengals and Georgia Bulldogs.

NFL Star Adriel Jeremiah Green became popular as A.J. Green with his exceptional juggling skills that developed his hand-eye coordination. Green has furthered his career in football singing in with Cincinnati Bengals but before that too, he had been an amazing player for Georgia Bulldogs. A.J. Green statistics say it all about his talent as professional football player.

Adriel Jeremiah Green, widely known as A.J. Green, was born on July 31, 1988 in Summerville, South Carolina in the United States of America. He is an American and belongs to black ethnicity. His father, Woodrow Green, is a steel worker and truck driver while his mother Dora is a clerk at Wal-Mart. He had an older brother named Avionce but he died in a car accident when A.J. was 4 year old.

When Green was in an elementary school, he was keenly interested in juggling. He had started juggling from his second standard. As a result of this interest, Green developed good hand-eye coordination. Green attended Summerville High School where he played as a wide receiver for the school team.

Enrolled in the University of Georgia in the year 2006, Green committed to play for Georgia Bulldogs from 2009-2010. AJ Green statistics read a freshman year record of 56 catches for 963 yards with 8 touchdowns. Before the season ended, he was honored as SEC player of the week when Bulldogs played against Arizona State.

Despite of injury AJ Green statistics raised to 6 catches for 57 yards in 2009 Independence Bowl. Therefore, Associated Press, SEC coaches and ESPN elected him “All SEC First Team”. In the final year with Bulldogs, Green was suspended for setting his 2009 Independence Bowl Jersey to former North Carolina defensive player, Chris Hawkins for $1000. Consequently, he also had to pay $1000 to a charity. After he officially ended his terms with Bulldogs, he signed for 2011 NFL Draft.

He signed in with Cincinnati Bengals on July 2011 for four years. Green recorded 100 yard games in his freshman year with NFL. Later in December, 2011, Green and his rookie fellow Andy Dalton surpassed the NFL record for yards and reception made by rookie player. The following week, AJ Green statistics became high enough to break Chris Collinsworth’s 1009 yards record.

In the year 2013, Green made a new record in his career and second record in Cincinnati Bengals with 98 receptions in 1426 yards. However, 2014 did not turn to be smooth for Green as he suffered from toe injury. Even though Green was suffering from injury he did his best scoring 69 receptions for 1041 yards. In spite of the fact that Green missed three games, he still made his fourth record in 2014 season.

During the end of 2015 season, AJ Green statistics was 86 receptions, 1297 yards winning 16th position in NFL Top 100 Players of 2015. In 2016, Green stayed on injury reserve and missed 5 games. By the end of the season, Green made 66 receptions for 964 yards and 4 touchdowns. It was the only season in which Green did not make 1000 yards. Nevertheless, Green received the honor as 6th straight Pro Bowl the same year.

With AJ Green statistics, it became clear that he was an achiever in his profession. There are more evidence to it. While Green was in high school, he became one of the “Top National Football Prospects”. Even Sports Illustrated listed him as number 1. Green received “All-State” honors for 4 times. Besides, Green became the only junior 2006 USA Today had nominated. As a junior, he had the record of 60 catches for 1203 yards. Rivals.com ranked him “#9 Prospects for High School” while Scout.com ranked him “#10 Prospect Nationally”. While Green was in Summerville High School basketball team, the team had won the 2007-2008 South Carolina state championship.

Talking about his relationship, he married a singer and model Miranda Brooke on March, 2015. The couple first met on Facebook and dated for about six months. Miranda appreciates Green’s patience and humility in the same way Green admires her.

Green had signed $60,000 contract with Cincinnati Bengals and he even received bonuses. His salary while playing for Bengal was $11,700. Therefore, the notable player has estimated net worth of $35 million.

The number of honors and titles Green has received demonstrates his ability and skills in his career and his professionalism. AJ Green statistics have not declined in his professional career for even a year. Instead, it has increased rising his net worth with time.