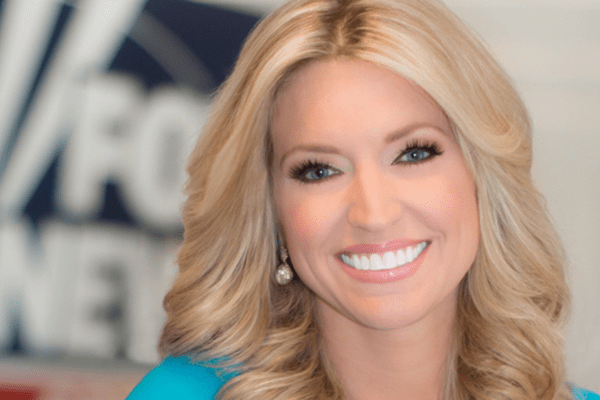 Beauty with brains, Ainsley Earhardt net worth is in the rising level as she has not only captured attention of the viewers of Fox News channel, but her admirable intelligence has also earned her a lot of honors.

One of the notable TV personalities, Ainsley Earhardt’s name is linked with the popular TV show ‘Fox and Friends’. Earhardt used to work for the curtain-raiser show ‘Fox and Friends First’ before she took the place of Elisabeth Hasselback. After Hasselback resigned from the program in 2015, Earhardt became the host of the show. From there onwards, Ainsley Earhardt’s net worth saw rapid increment.

Ainsley Earhardt was born in 20 September, 1976 in Spartanburg, South Carolina to Mr. and Mrs. Lewie Wayne Earhardt. She was raised both in South Carolina and North Carolina alongside her siblings Elise Giles Earhardt and Trenton Graham Earhardt.

Talking about Ainsley’s education, she attended Sharon Elementary School for her primary education. Then she joined Florida State University, after completion of her higher secondary education from Spring Valley High School. Earhardt was a bright student. Thus, she had achieved academic scholarship on leadership to complete her studies in Biology. She was an active student as a result of which she had served as a senator in student government. She then completed her bachelor’s degree in Journalism from the University of South Carolina by leaving Biology. Her leadership traits and active participation earned her some notable awards. To name, she has won Outstanding Young Alumna from University of South Carolina’s Young Alumni Award in 2007. Not only awards, she has also earned a lot of admirers from in her early days. These honors, henceforth, were the indication that Ainsley Earhardt net worth would gain spectacular rise.

Earhardt initiated her career by working for WLTX-News 19 in Columbia. WLTX-News 19 network had hired Ainsley Earhardt before her graduation as she was a top student in her university. In 2005, she served for KENS-TV, a part of CBS5 group in San Antonio, Texas as a news anchor. She was the anchor for the number one rated programs “Eyewitness News This Morning” and “Eyewitness News at Noon”.

While working with WLTX-News 19 for four years and KENS-TV for two years, Ainsley got chance to sharpen her skills. Currently, she works for Fox News Channel as a journalist and co-host of “Fox and Friends” and “Fox and Friends Weekends”. Besides, she also reports Fox’s Hanity and presents a segment in the program called “Ainsley across America”. All these programs have increased Ainsley Earhardt net worth and popularity far and wide of America.

Earhardt’s proven leadership traits won her the most sought after Caroliniana Creed Award. Overachiever Earhardt was elected to the University’s Homecoming Court. In addition, she has gained publicity by covering some of the popular news events. To name a few, she covered the famous FortHood Base shooting news event and the death of Actor James Gandolfini. Earardt also earned value due to her excellent coverage of the E5 tornado in Moore. Not to mention in 2014, Earhardt contributed to the success of FNC New Year Eve Special plot “All American New Year”. Earhardt is exceptionally famous for covering man-made and natural disasters namely, 2010 Deepwater Horizon Oil Spill and 8.0 magnitude earthquakes occurred in Sichuan Province, China. Ainsley Earhardt net worth stacked as Columbia Metropolitan Magazine voted her “The Best Personality of the Year”. Ainsley’s pure dedication towards work has piled up respect, fame and awards.

Looking into the personal life of Ainsley Earhardt, she married Kevin Mckinney in 2005 and stayed together until the relationship between the couple sabotaged. The couple divorced in 2007. She remarried Will Procter-former professional footballer in 2012 after five years of staying single. On her show, Ainsley declared that she is happy with her husband Will.

Ainsley Earhardt’s brilliance in journalism and anchoring is not only the thing to boast about. The competition between two sides of Ainsley Earhardt— best-selling author and a popular TV host— got tough to rank after she co-authored a motivational book for children. The book has a theme one should follow their dream and it instantly became the best-seller. Earhardt co-authored a children’s book “Take Heart, My Child—A Mother’s Dream” with Kathyrn Cristaldi. The bestselling book resulted in Ainsley Earhardt net worth pushing her towards the peak of fame.

Ainsley Earhardt has been remarkably popular student, journalist and television personality because of her outstanding performance and talent. Earhardt’s appealing personality combined with professionally stunning looks has imprinted her image in the Fox News channel viewers. In addition to her looks, her intelligence has long gripped attention of lot of viewers. Ainsley Earhardt net worth is not only accumulated by wealth she has earned, but also by her ability to make place in people’s heart.