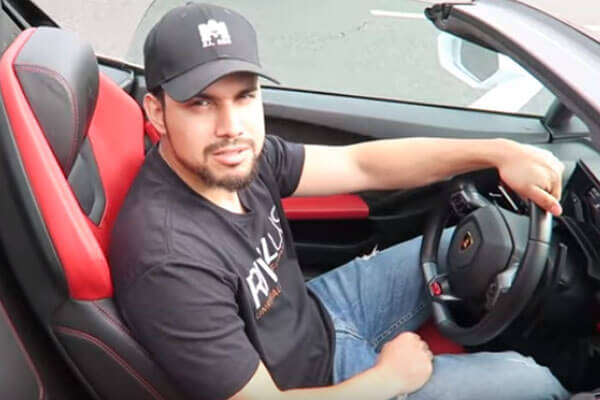 Famous pranking YouTuber Ruben Sole is best known by his YouTube channel EpicFiveTV. With more than 1.9 million subscribers as of September 2018 in his one YouTube Channel, one can easily assume that Ruben Sole’s earning is more than $100 thousand.

Born on Los Angeles, California, Ruben started his YouTube journey with channel Infamous Epic, which later became a gaming channel. Ruben then uploaded his first prank video on his new channel EpicFiveTV on April 2013. And since then Ruben Sole’s prank vlogs has helped him earn enough for a free and easy lifestyle.

Ruben Sole’s estimated monthly and yearly earnings as of September 2018:

Have a look at Ruben Sole’s $100 honesty social experiment video he uploaded in his Instagram.

The 30-year-old YouTube star has been giving his quality time in making videos on YouTube. He also has a secondary channel EpicFiveLive. And recently, he has started a new channel, Ruben Sole, which has already gained 8994 subscribers as of September 22, 2018. This channel will soon be another good source of income for him.

Ruben is known for his prank, social experimental videos, interviewing people with different interesting topics, and currently even participating in boxing. His viewers were also really amazed by the weight-loss transformation challenge Ruben did in himself. Ruben certainly became successful in completing the challenge. In fact, his physique looks great. The picture below speaks all.

He definitely knows what his audiences like and therefore has gained a pretty number of followers and regular viewers. It also seems like his transformation, and popularity has opened doors of modeling to Ruben. His picture and Insta captions give us a clue that Ruben has been earning fame and money by being a Calvin Klein model.

A Calvin Klein model is known to earn $49,199 in average with top 10% earning more than $50,880. Also, Comparably statistics shows that the Underwear models in the US pocket $83,507 median salary. Ruben probably doesn’t need to arrange a separate professional photo-shoot for being a brand model or representative. As his vlogs have outreach to a great number of people.

Ruben often travels for his vlogs. Las Vegas has definitely been Ruben Sole’s money making the place as his viewers enjoyed his 2016 vlogs at that place the most. Then in 2017, Ruben returned to his home, his birth place Los Angeles. There, when he made videos with exotic and super cars like Bugatti, Lamborghini Huracan and others, Ruben mentioned about his dream car.

Lamborghini Huracan, Ruben Sole loved this luxurious car. While shooting the video, Sole did a photo-shoot with the car and showed the interiors. He said that the car is really beautiful with a possible retail price of $200,000. So, hopefully one day he would afford to get one. So, this luxurious car is sure to be added in Ruben Sole’s net worth.

We wish all the best to Ruben Sole to be listed in the richest YouTubers pretty soon!

Stay with us and get entertained with celebrity news, biographies, entertainment, health & beauty, article updates.