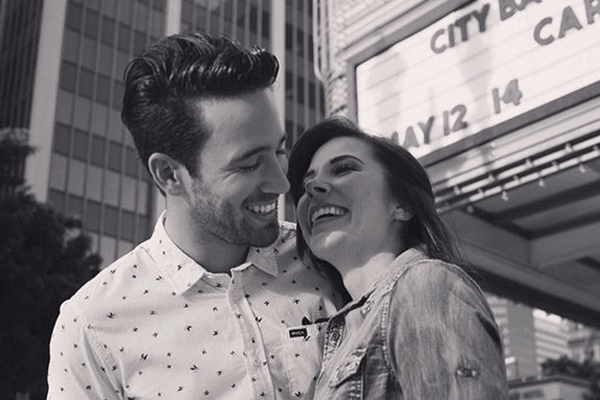 Who wouldn’t have a crush on Katy Perry? The Roar singer first saw the dashing Trevor Holmes during the audition of 16th season of American Idol and had lost her heart over him. As Trevor makes his way through the door Katy instantly calls him a “dreamboat”, blushes and instantly falls for the guy.

There are a number of guys who would leave their girlfriend if they were to be approached by the gorgeous Katy Perry. We can clearly see how much Trevor Holmes is committed to his girlfriend Sierra Nielsen, else people would go head over heels if they were to be captivated by a pretty celebrity like Katy.

If it weren’t for Trevor Holmes’ girlfriend Sierra Nielsen, only lord knows if Katy and Trevor would hook up or not. The couple of Trevor and Sierra has been in a relationship for 2 years now.

I look like an ugly turd next to her and that’s totally fine by me. My new song “Walls” was written about this woman. The other day she told me I should keep a journal about my thoughts and feelings. I said “I do, my journal is my songs, and it’s scary cuz the whole damn world gets to read it”. But that’s the beauty of being a song writer. You throw a piece of your life out there and hope other people are going through the same thing. @sierranielsen thank you for inspiring me every day. ? @photos.shay

After finishing the audition and getting the golden ticket to Hollywood, the judges, Luke Bryan, Lionel Richie and also Katy Perry stand up to congratulate Trevor on his feat. Suddenly Trevor’s girlfriend Sierra sprung through the door. Sierra makes Katy Perry run.

Trevor Holmes’ girlfriend Sierra Nielsen is also a no common woman either, Sierra is a lifestyle blogger and a popular fitness instructor. In both physical and mental fitness, Sierra is a pro. She even has her own YouTube account under her name, where she posts vlogs about how to remain fit and healthy.

The 28-year-old Trevor couldn’t continue his run in the American Idol and was unfortunately eliminated and wasn’t selected in the Top 24. The irony is Katy was the one to let him know that he couldn’t make it to the next round. She was bummed to see Trevor leave. Katy even tore the decision card in pieces.