Soccer Player Tobin Heath Salary and Net Worth is huge 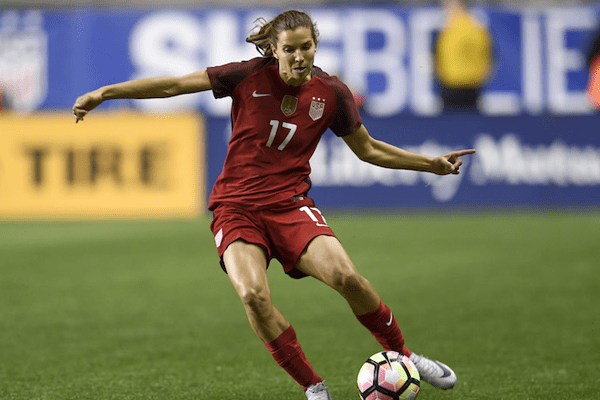 Attacking midfielder Tobin Heath’s Net Worth is aspiring as her career has been. Two times Gold Medalist Tobin Heath’s salary Amasses between $278,000-$565,000 as an NWSL football player.

Heath has represented and has signed endorsement deals with brands like Six Stars, Glukos and Procter & Gamble.

Let’s find out more about her aspiring career and Net Worth.

NWSL relies on the support of U.S. soccer so they offer modest salaries to the majority of its players. Fully contracted players receiving salaries to play in the league often have to take outside jobs to add to their Net Worth.

Heath’s Income from Endorsements and Advertisements 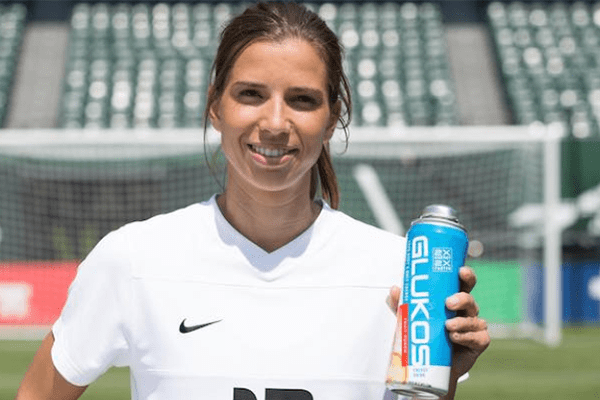 Heath is a brand Ambassador of Glukos.

In an Interview with Goal Nation Tobin stated GLUKOS really had an impact on her performance in the game. Her favorite flavor is a Fruit Punch GLUKOS Energy Gel pouch. The GLUKOS Company Inc. might have provided Heath a substantial amount to support and advertise the product.

If you train to be fast, speed up your recovery with @sixstarpronutrition #ad #greatnessisearned

Heath is a member of Six stars company. Six Star products include protein supplements, Pre- Workout and Post- Workout diets and other muscle building products. Since she is featured in Six Star marketing campaigns and advertising, the company probably is providing her with generous payments.

Purchases of Procter & Gamble products helped in funding scholarships for 250 kids from the local area at her soccer camp in Scotch Plains, NJ. 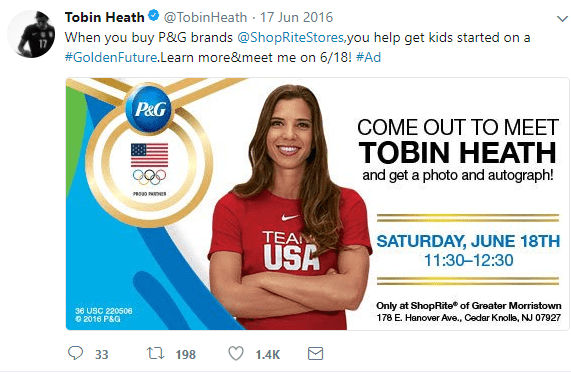 Facts on Tobin Heath’s Net Worth

Thanks SI for giving each of us our own cover! @SI_soccer (?Simon Bruty)

Born on May 29, 1988, as Tobin Powell Heath and raised in New Jersey. Heath has a younger brother Jefferey and two elder sisters, Perry and Katie.

Her sister Katie played NCAA Division I tennis at the University of Delaware. Since age 4 Heath started playing soccer at the back of YMCA.

She graduated from Ridge High School in 2006. Heath won three Parade All-American in soccer and was a four-year letter winner.

She majored in communications from the University of North Carolina. Heath helped lead UNC to NCAA Women’s Soccer Championship titles in 2006, 2008 and 2009.

Coach Anson Dorrance himself said that Heath preferred to nutmeg from the position of midfield to opponents rather than dribbling the ball around them.

In 2010 Heath was drafted for the Women’s Professional Soccer 2010 and was added to Atlanta Beat.

On December 10, 2010, she was traded to Sky Blue FC and made twelve appearances. The team finished fifth with 5 wins,4 draws and 9 losses.

Heath joined New York Fury of WPSL Elite Leauge. She played one game prior to her ankle injury at the start of the season. Later she went to the national team.

Heath signed a six months contract with PSG in the French Leauge, Division 1 Feminine. She scored five goals and made twelve appearances for the club.

Heath contract was until season’s end on May 23, 2013, and returned in September 2013. Since PSG had signed a six-figure deal in 2012 for Colorado teenage Lindsey Horan, Heath might have received more or same amount to sum up her Net Worth.

Heath joined the Portland Thorns in July 2013 and help them to attain the 3rd place in the championship. The Thorns won the NWSL in 2013 after defeating Western New York Flash 2-0. Heath contributed a game-winning free kick and voted as Most Valuable Player.

In the 2016 season, Heath contributed five assists in five games and earned the April’s NWSL Player of the month. Heath stood as fan favorite and player of the week for 6 weeks.

Tobin had international experience as a youth. She made her first debut for the national women’s team on January 18, 2008, at the Four Nations Tournament.

During the Summer Olympics of 2008, she earned three caps in the tournament. Her team won the Gold Medal, while Heath was the youngest member of the squad at 20 years old.

Tobin was honored the 2009 U.S. Soccer Young Female Athlete of the Year but did not play for the USA in 2010. Her recovery from illness and a major ankle surgery withheld as she was ruled out for 8- 12 weeks.

In 2012 Tobin grabbed her second  Gold medal at the Olympics of London.

In 2015, Tobin was a starter for national Team USA. She was noted as one of three U.S. women to score a leading goal in the final to win the 2015 FIFA World Cup championship.

Tobin Heath is a 5 star player in game FIFA along with Marta of Brazil. She and her national teammates were featured in FIFA 16, first-time female squad included in the game. EA ranked her as the No. 15 women’s player in the game. 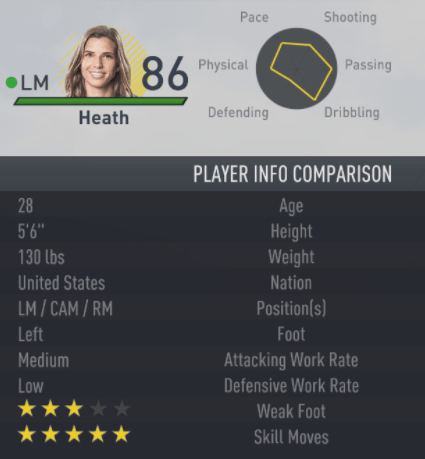 Heath’s national Teammate Alex Morgan is also a gold medalist and plays as a forward for Orlando Pride. Worth of $3 million, Morgan is an inspiring athlete with quick pace and skillful body feints. Fifa 16 featured Alex Morgan along Lionel Messi on their

After winning the 2015 FIFA Women’s World Cup, Heath and her teammates became the first women’s sports team to be honored with Ticker tape parade.

Each player received a key to the New York City from the Mayor Bill de Blasio.

The same year in 2015 the team was honored by President Barak Obama at the White House.

According to U.S. Soccer Federation Heath is the most skillful player and was voted the U.S. best player in 2016.

Eyebrows were raised about Christian Press and Tobin Heath dating. The duo was seen together a couple of times and seems like something is fishing between them.

Heath seems very attentive and attached to Christian Press. Though the pair has not made any Public announcement regarding their relationship, there is definitely some bond between them.

This compilation presents footages of Christian Press and Tobin Heath together.

Rumors were around that Tobin Heath and Alex Morgan were dating. The rumors were just a rumor and not true as Morgan married to Servando Carrasco of LA Galaxy on December 31st, 2014.