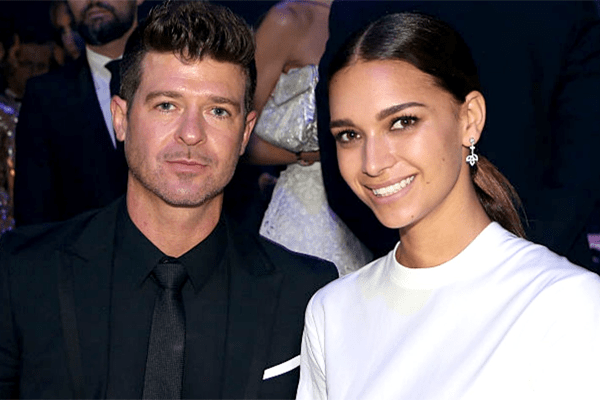 Are Robin Thicke and girlfriend April Love Geary expecting a baby together?

Robin Thicke and girlfriend April Love Geary are pregnant with their first child. The soon to be a mother, April took to Instagram to post a picture of her ultrasound which revealed a miniature baby. April Love Geary captioned the picture sharing that she and Robin were “excited to share” that they are going to have a baby. She also revealed that the baby is due on 1st March. She ended the caption following “Alan’s birthday!” Alan in this regards is Robin’s late father who died in December 2016.

Robin and I are very excited to share with you all that we’re having a baby! The due date is March 1st, Alan’s birthday! ❤️

Following the lovely Instagram picture of her ultra sound, April Love went on t post a picture of herself in a blue bikini while showing off her cute baby bump. She captioned the picture “Happy in Hawaii with my lil peanut”! The child must indeed be a peanut right now!

Happy in Hawaii with my lil peanut ?

Robin Thicke was previously married to his ex-wife Paula Patton. Thicke and Patton went through a very publicized divorce in 2015. The couple had separated early in 2014. However, the divorce proceeding took a year because of the dense custody battle. They were on the end of reaching their custody agreement this year as reported by TMZ. Together, the couple has a child named Julian who is currently 7 years old.

Robin went on to be in a relationship with Geary after his divorce with Patton. They made thing official in May 2015 during the Cannes Film Festival. Robin is 18 years older than Geary. However, the two make a good couple. Geary and Thicke will be having their first child together very soon!