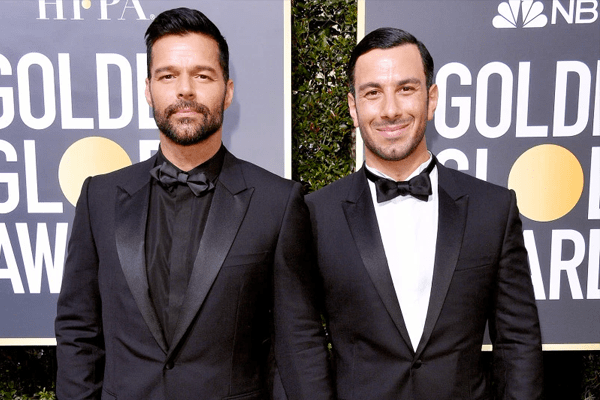 “It feels amazing! I can’t introduce him as my fiancé. I can’t. He’s my husband. He’s my man,” says Ricky Martin.

“I’m a husband, I’m a husband, but we’re doing a heavy party in a couple of months, I’ll let you know,” Martin told E! News on Monday, 8 January, confirming his relationship status with E!News.

“We exchanged vows, and we’ve to swear [sic] everything, and we’ve signed all the papers that we needed to sign, prenups and everything.”

You’re probably surprised if you’re a friend of Ricky Martin and found out from this headline that he’s already married to Jwan Yosef and were not invited, but don’t worry. Their marriage was a secret ceremony, and the big party is yet to come in months.

In November, the American Crime Story actor also spoke to HOLA! The USA, on his wedding plans.

He said, “When I get married, I want to shout it out from the roof. And I have said in many interviews that my wedding will last three days, and everyone will find out.”

As for the location, Martin stated, “Well, I do not think it could be in Puerto Rico because my partner’s family is in Syria and unless things change, I wouldn’t be able to invite his family.”

Martin describes it to be a wedding dressed in white, barefoot and at the edge of the sea in his land Puerto Rica, he continued. “Then, I will marry in several countries, but that party in Puerto Rico needs to happen.”

Sounds exciting and cute, isn’t it?

How did the Martin and Yosef meet?

To everyone’s surprise, the couple started dating in 2016 after they met through Instagram.

Ricky is a big art enthusiast and collector. while he was browsing through Instagram, he found Jwan’s artworks and instantaneously went crazy and contacted him.

He knew that Jwan Yosef is a 33-year-old Syrian painter and of Armenian descent who was raised in Sweden and moved to London in 2016.

Impressed by Jwan’s art, he started chatting for six months about only art.

They met in person in London when Martin visited London just to meet Jwan.

In November 2016,  Martin announced on The Ellen DeGeneres Show that they were engaged.

Speaking to the host, he shared:

“Well, now he lives with me. He’s a conceptual artist, and I’m a collector, so I started looking for art, and I saw his art, and I went crazy because I love what he does. Original, and then I contacted him.

Ricky is a father of 9-year-old twin boys, Matteo and Valentino.

Since the relationship went public, Jwan has been an Instagram star, and his followers increased more than 328,000, and he isn’t shy about sharing his relationship updates and pictures.

Ricky Martin gives a sneak peek to his fans of his new Beverly Hills Mansion.

They were planning to live in London or New York City, but after staying in Los Angeles for a month, they were attracted by the vibe of L.A. and decided to stay there “L.A. caught us off guard—we loved it.”,said  Martin.