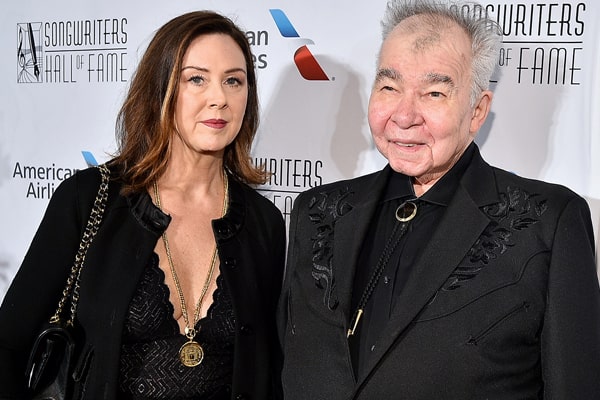 Fiona Whelan and John Prine have gone through different stages of life and are still in love with each other. Image Source: Theo Wargo.

Music is a universal language that touches every soul. Likewise, musicians convey their joy or sorrow through their music, and the world makes the connection. Therefore, musicians are magicians, and so is the American folk singer-songwriter, John Prine.

John Prine has been in the music world since 1971 and has given several good pieces of music. Like the world believes a sound support system allows one to fly sky high, and so did John Prine with the help of Fiona Whelan. The couple has been together since 1996 and is still going strong. Therefore, let’s get to know about the woman the singer mentions before performing his songs, John Prine’s wife, Fiona Whelan.

John Prine’s sweetheart, Fiona Whelan, is an amazing woman who also works as his manager for their business, Oh Boy Records. She took on the role after the death of Prine’s business partner and manager Al Bunetta in 2015.

In Prine’s wife, Fiona Whelan Prine’s presence, the king of folk released For Better Or Worse, featuring duets with females from different genres, including Lucinda Williams, Emmylou Harris, Patty Loveless. Mrs. Prine has a keen mind for business and thus moved to consolidate the company in the hands of the people closest to the iconic songwriter.

Have Been Married Since 1996

Fiona Whelan met John Prine in Dublin, Ireland, when she was working in a recording studio called U2’s Windmill Studios. The couple fell in love with one another and married on April 6, 1996. She married one of the greatest folk legends and moved to Nashville, United States.

The couple is proud parents of three children; Tommy Prine, Jack Prine, Jody Whelan. John Prine and Fiona Prine knew to differentiate their personal and professional life, and thus, there is not much on their marriage. But since Prine’s wife Fiona works as his manager, they get to spend more time together, travel, and look after their business together.

Therefore, this only proves to have gotten John Prine and Fiona Whelan Prine’s bond stronger. The couple has not only been through the business hurdles but also John’s health issues. It is not unknown that John Prine is a two-time cancer survivor and had to go through harsh medical procedures.

Fiona stuck by John’s side and encouraged him throughout his surgeries. The couple patiently waited for recovery, and a few months later, they were off to tour. Therefore, the world says it right; two people who go through hell stick together. Even today, the couple is incredibly in love and are sharing their moments.

John Prine’s wife is a Nobel woman with a desire to change the world for good and thus acts as a global advocate for Thistle Farms. The organization is a non-profit social enterprise that is dedicated to helping women survivors heal from prostitution, addiction, trafficking, and abuse.

According to Mrs. Prine, the mission appeals to her on many levels. Likewise, Fiona’s journey of recovery from childhood trauma and alcohol abuse helped her connect with the women. She learned about the organization through her son, Tommy, and got involved since 2004.

John Prine’s wife, Fiona Whelan, battled COVID-19. She was tested positive in March, and the couple was quarantined and isolated from one another. Although Fiona recovered, her husband remained critical and infected.

The Grammy-winner, John Prine, was hospitalized on March 26 after a sudden onset of coronavirus symptoms. Then, later on, he was put on a ventilator as he had pneumonia in both lungs. Fiona updates the fans daily, and thanks for all the love and support they have amassed from the fans.

Although Whelan Prine is disappointed not to stay by her husband’s side, she also remains faithful to his recovery. Unfortunately, Fiona Whelan Prine’s husband and one of America’s most talented folk legend, John Prine, died on April 7 from the complications of COVID-19 at the age of 73.

Although Mr. Prine is gone, his legacy will remain via his work and family. Stars like Bruce Springsteen, Jason Isbell, Miranda Lambert, Seth Meyers, Margo Price, and many other artists shared their condolences and support to the family via social media.

Let’s hope the family gains strength in this challenging situation.