Home / Why did Emily Canham and her boyfriend Jake Boys stopped dating?

Why did Emily Canham and her boyfriend Jake Boys stopped dating? 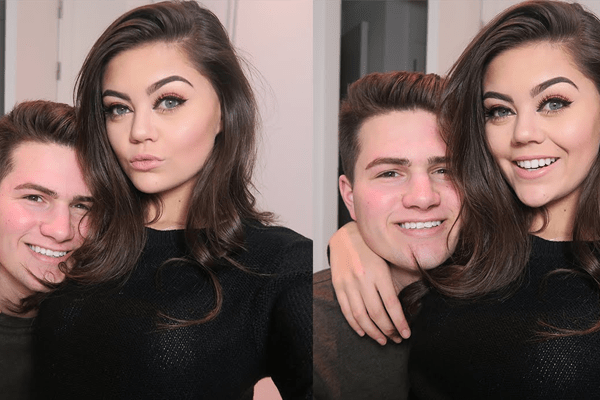 The British YouTubers, Emily Canham, 20, and boyfriend Jake Boys, 21, parted ways in February 2017. They had traveled together, filmed vlog videos together and lived together since 2014 according to Clevver. Their affair was kind of relationship goal any person could ask for.

Sadly, they couldn’t continue together along their paths and had to part ways. Let’s have a comprehensive look at both sides of their story.

Jake and Emily had a public relationship for 3 years. They met through YouTube in 2014. They had named their duo as “Jemily” and together created many vlogs. Emily Canham’s boyfriend Jake Boys look so much in love with his girl. The couple had spent months trying to find a perfect place to continue living together but things between them didn’t come along.

In February, the lovebirds parted and went different ways. Their relationship didn’t come together despite both being supportive of each other. Emily explained in her vlog that she was nervous and felt awful to announce publicly of her break-up with her boyfriend.

The duo who were so committed at one point now doesn’t follow each other on social media.

Emily Canham publicly spoke of her break-up on Instagram.

Hey! This is something that has taken some time to be okay to talk about online. Firstly, thank you to those of you who have been madly supportive over the last little while, it means more thank you can imagine! Jake and I are no longer together. We’re still friends, there’s no hate or bitterness we just grew apart and our lives are taking us in different directions. I wish him all the happiness in the world but unfortunately our happiness is no longer together. This is something that is super difficult for both of us, so please just keep in mind that our feelings are raw and real. We have chosen to private / delete somethings online, a choice we made together. Obviously a lot has changed with living situations, Cody etc and we would appreciate if you would not judge our choices, they have been made together, not to hurt the other person. Thank you for supporting us as a couple from day one until the end! The last two and a half years have taught me a lot. We’ve made a ton of incredible memories and I’ve seen Jake grow so much as a person. I know that he’s going to go super far in life and be so very successful! Finally, we’re both still healing so please just give us some time, sorry if I miss an upload or I’m not too active, you now know why. Thank you for everything. Xx

Noone can get over soon from a break-up. It’s the same for the boys. Emily Canham’s boyfriend Jake had also posted a heartfelt aspiring message on his Instagram. Jake on the break-up post focuses on Emily and how lucky he was to have spent the last two and a half years together with his “best friend”.

He also stated about meeting Emily, and all the moments they cherished while dating. 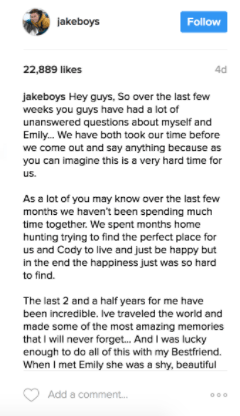 Emily Canham’s boyfriend Jake responds to the whole not following each other on social media thing as a start to move on.

He states in his youtube vlog “Why I HAD TO UNFOLLOW HER & KEEP MOVING FORWARD!”  that people tweeting about them on how good they “together were” as a “Kick in the face“. He has moved on his life with a positive attitude respecting her.

Presently they have both unfollowed each other on social media to workout on the break-up and move along.

After their break-up, they went to Orlando just as good friends. Speculations and questions were raised about whether they were still together?

In reality, they were just spending quality time with friends to cherish their moments together. Emily also stated that it took her six months to overcome their break-up. She is enjoying her single life and being happy with herself.

Jake currently lives in England and is working out on gyms and making his daily vlogs.

Be in touch with SuperbHub for more interesting entertainment news and details.