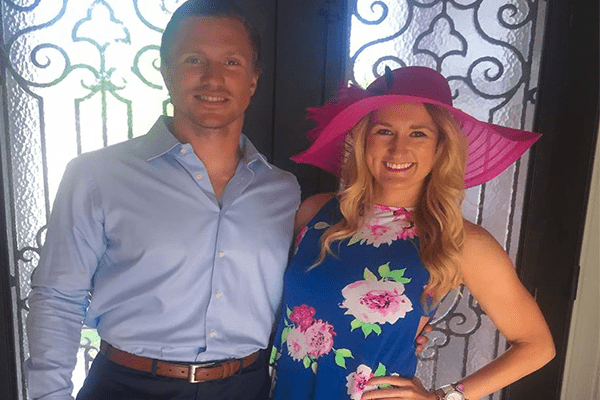 It is a wonder why NFL’s Star Blaine Gabbert and his girlfriend Bekah Mills aren’t married yet. All the fans are dying to see them as husband and wife. Do they want to continue dating before going to the next level? Or are they still together? Well, it’s been quite a long time. And Blaine Gabbert’s girlfriend is no longer just Blaine’s partner. They both are celebrity couple.

Blaine Gabbert and Bekah Mills knew each other since their college at the University of Missouri in 2008. Their athletic interests might have helped them bond and come closer. They met in college and might have started dating sometime around 2008.

The couple seems to get along often in various functions and places. Moreover, the NFL star’s girlfriend Facebook account consists tons of pictures of her family and Blaine Gabbert.

It appears that Blaine and his girlfriend Bekah together took a trip to Alaska with Allie and Connor Mach.The picture of the snowy mountain looks very nice and natural. It’s not entirely sure it was Alaska but by looking at the landscapes and rugged terrain it appears to be so.

Blaine Gabbert’s girlfriend usually updates her profile picture with her boyfriend, Blaine. She updated this picture on November 18, 2016. They look so adorable as a couple.

Bekah is also responsive about their relationship and acknowledges appreciation from her friends in social media. Here, Bekah Mills is thanking her friend Tricia for calling them as a beautiful couple.

They have been together for such a long time and present as a cute couple. It proves that they are madly in love with each other and understand each other. From Bekah’s recent post of December 10, 2017, we can know that the couple is still in a relationship.

Is Blaine Gabbert planning a marriage with girlfriend Bekah Mills?

Since the couple gets along often and Blaine Gabbert is having a pretty good relationship with Bekah’s Family we can make an assumption that they will tie the knot soon in future.

Is it something with their career that they haven’t married yet? The lady has earned a Masters in 2012 from University of Missouri and might be focusing more on her career. Meanwhile, Blaine has also set his aim high with Arizona Cardinals on his one-year contract.

They haven’t declared anything about their plan on marriage. They might be planning for a secret marriage or giving all the fans a big happy surprise soon.

We know about the NFL quarterback Blaine Gabbert. Born in Ballwin, Missouri, Gabbert played college football at Missouri before he left for the 2011 NFL draft after his junior year. He was then drafted by the Jacksonville Jaguars and has also been a member of the San Fransisco 49ers. On May 10, 2017, he signed a one-year contract with the Arizona Cardinals.

The graceful blonde is not a movie star but played as Point Guard on the women’s basketball team while her boyfriend, Gabbert played Quarterback as a sophomore.

Unfortunately, Bekah’s basketball career concluded with her sustaining 4th torn ACL. Her injuries led to shifting her career from sports to Accounting.

Bekah earned her business accountancy degree in May 2012 and holds a Masters of Accounting from the University of Missouri.

Blaine Gabbert’s girlfriend has the charm and softness that had definitely ruled the NFL star’s heart. Needless to say, they flourish as a perfect NFL couple and it might be possible they will get married this year.

Stay with us to get updated on more Entertainment and relationship news.