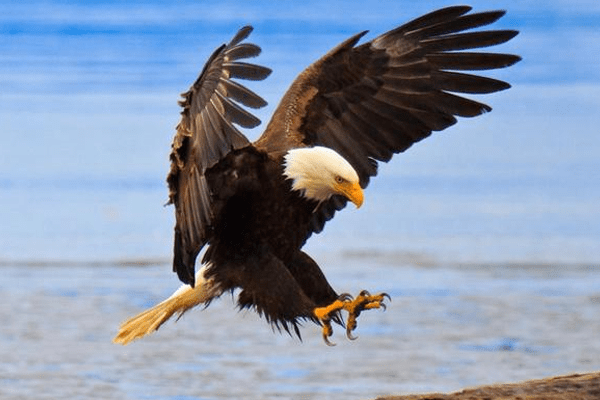 The predatory birds, Eagles, never cease to amaze us with their mighty body, perfect aerial skills, and their keen eyes. They have managed to gain both the respect and fear from human beings. There are interesting facts about eagles, which very fewer people might get to know.

Eagles are known for their outstanding vision and coordination, they see four times better than our view, and are accomplished birds of prey particularly because of their keen eyesight. They can see ultraviolet light and can also detect the UV-reflecting urine of prey.  Their kill is hence swift, accurate and on point. They boast a 20/4 vision with 100x better night vision than human beings.

Another interesting fact about eagles is their association to mythology. They are known in old age books for being a giant magical bird which controls the thunder and lighting. In the Middle Eastern story of Sindbad the Sailor, eagles are considered to be the reason for the existence of the massive rock. Eagles are also respected by the Aztec Empire and they represent the Greek god Zeus.

Bald eagles are majestic creatures and so is their courtship. The Eagles clasp their talons together and fall through the skies, before breaking off at the last moment. Eagles are monogamous and loyal, their nests are reused over generations of ascendants. One such next in particular is said to have existed for over 150 years in Iceland.

There has been a myth that the decline in the number of bald eagles was due to the extensive use of DDT. The truth, however, is that DDT is marginally dangerous to humans, and much less dangerous to Eagles. The cause of decline was due to shooting and habitat loss and not due to the extensive use of DDT. DDT seems to have been banned for an environmentalist political reason, and eagles have no roles to play in the ban of DDT.

Golden Eagles are the strongest Eagles in the present era, strong enough to drag an adult mountain goat off cliffs with strength of 750 psi. However, the prehistoric man-eating eagle of New Zealand named the Haast’s Eagle, are no comparison to the present day golden eagles. They are said to be the most powerful eagles, which preyed on the 12 feet flightless moas with ease. With the extinction of the moa, so the Haast eagles got extinct too.

Eagles have been considered to the perfect solution for using drones. Drone catching eagles were trained by the Dutch police, and now this fact has grown to be a much bigger problem. The interesting fact about eagles is that they can be trained to catch these drones, sometimes filled with drugs. Eagles are a perfect way to carry drones around the airspace with ease.

The Golden Eagle has been trained throughout history, to hunt for food. Depending upon the nature of the prey, the golden eagle has been used as a hunting companion. These eagles are taken from their nests as eaglets and raised by a master to form a personal bond. They are treated like family and are used to follow the attacks on prey times likes foxes, wolves, and hares.

It has been noted that bald eagles are not particularly hunters, but scavengers and thieves. These eagles use their body size to snatch food from the osprey and other birds. This is because bald eagle is not a true eagle. T is a sea eagle related to the vulture lineage. Bald eagles are hence scavengers, which feed on food items preyed upon by others, or food left around by other hunters.

Eagle females lay between one to five eggs after copulation and after furnishing their homes. One of the parents naturally plays out and is on the lookout for the eggs for the entire time. However, once the eggs hatch, some larger eaglets, particularly the females commonly kills its sibling, females in eagles are generally larger than males, which assist in maternal instinct for nest building, protection, incubation and defense from the male species.

Eagles have now gained positions all over the world, for symbolic representation. Eagles have been honored has the national bird of 18 countries, and have been included in 25 national coats of arms, however, in the 19th century, people shot down Eagles by deeming them to be predators. Laws have fortunately been made worldwide now, in defense of Eagles. Fines up to 250,000 dollars might be applied to anyone with a possession of the feathers of an eagle. Some countries have made regulations of 12 years in jail for killing an eagle.